THIS ARTICLE IS BEING REWRITTEN!

Circuit Board is a unicorn that has the ability to manipulate and absorb any & all kinds of electricity to amplify his raw magical energy output. Since he has this ability, and an interest for electricity, he devotes most, if not all, of his time studying electricity, just like his father, and before him. Not only does he study it, he also does it for a living, practicing as one of the few electricians that exist. He forgot to turn off the generator that was powering the device, when he left to go buy more magical oil to cool down the transformer itself. Circuit Board can also grow a magnificent beard.

How Lightning Strike Unlocked His TalentEdit

Lightning Strike was born on the seventh of May, to his father, Electric Wire, and his mother, Mozzarella. He is the eldest of three siblings, his little brother is Nano Watt, and his little sister is Marzolina. He grew up in a nice little house in the outskirts of Ponyville, where it was quiet. Lightning Strike had a normal, if not average, upbringing, though there were quite a few remarkable events that happened throughout his childhood. His father and mother rarely ever get into arguments, and he also has a good relationship with his siblings. As per family tradition, where the firstborn son is taught electricity, Lightning Strike's father tried to get him into electricity, which was successful. Lightning was fascinated deeply by electricity, and wanted to continue his family tradition. Lightning Strike even built his first Jacob's ladder at the age of six, which he had help from his father, of course. During his childhood, Lightning usually kept to himself, refusing to play, or even talk, to the other fillies and colts in his class. He was a very shy, and quiet colt, and he would rather let his actions do the speaking for himself. Eventually, in his high school years, he met a group of friends that finally helped him break out of his shell that he built to keep the outside world away. Those friends are now known today as the Elements of Creation. Unfortunately, after high school, they parted ways, because even in high school, they had difficulties spending time with each other. After Lightning moved out of his parent's home, his parents and his siblings moved to Fillydelphia, which is where his mother, Mozzarella, hails from. She opened a cheese shop there, since cheesemaking is her passion.

A few months after he first met the Mane Six, before Twilight transformed into an Alicorn and was coronated as a princess, the house that he lived in was burned down after his experimental AC to DC transformer caught fire. He forgot to turn off it's power source when he left to purchase magical oil, that he used for coolant. The oil was enchanted so that it can absorb heat, but the enchantments wore off, which caused the transformer to overheat, then combust. By the time Lightning Strike came back to his house, it was already too late, most, if not all of the house, was engulfed in flames. The fire wasn't noticed by too many, because it was located near the outskirts of Ponyville. Though, the local fire brigade responded immediately, actively putting the fire out. After the fire was out, Lightning Strike frantically went to the destroyed house, scrutinizing and searching the ashes to see if any of his notes and data survived. After seven minutes, it became apparent to him that nothing survived the blaze, and he started to slip into despair, as he lost hundreds of hours worth of notes, that he would use to write his entry in the Book of Electricity. He slipped into it faster when he realized that the book itself was destroyed, which was not the case. Eventually, Twilight and Rarity, who were taking a stroll when they noticed a column of smoke in the air, went to his now destroyed house, finding a forlorn and depressed Lightning. Twilight tried to talk to Lightning, but he didn't respond; he was just staring at his former home. Twilight approached him, trying to make him feel better. This attempt worked, because Lightning started to talk, but he wasn't happy. He started to say that he lost hundreds of hours worth of notes and data, and his special book in the blaze. Rarity tried to help by saying that it's probably not too bad, but Lightning disagreed. Now that he was homeless, he had to move back with his parents in Fillydelphia, and he didn't want to, because he could never bring himself to move away from the place he was raised in. Twilight saw in his face that he was devastated by this, and told him that he could live with her, until he can find a new home. Lightning was astonished by what the purple unicorn said, so much that he could only say the word, "...What...?". She said it again. Lightning then thought that he might be a burden on her, and he reluctantly refused it, explaining that he doesn't want to be a burden on her. Twilight told him that he won't be a burden on her, and says that she has an empty bedroom that he can sleep in. Lightning immediately hugged Twilight, exclaiming that she was a life saver. Twilight smiled, and told him, "That's what friends do.". A few minutes later, he searches the ashes again, and finds the book that he was sad about losing, the Book of Electricity. He wondered why it was intact, but then took it with him, since it was the only thing that he could take to Twilight's library.

Lightning Strike is now nineteen, and he works mainly as an electrician, because of his borderline obsession with electricity. He keeps in touch with his family, who now live in Fillydelphia, after he moved out of their home. He is also friends with the Mane Six, he visits them usually when he has the time and when he feels lonely. Lightning is also currently a Vampony.

Circuit Board is a rather calm, somewhat shy and introverted pony who rarely ever gets angry, but when he does, it usually doesn't last long. He was much more shy and introverted when he was younger, but he eventually met the right ponies, who helped him come out of his shell. He does his best to be polite and respectful, making sure that he does not become a troublemaker. He deeply cares for his friends and loved ones, defending them whenever he can, even if it risked his own life. Circuit Board is incredibly intelligent, which is a trait that is not usually found among the stallions of Equestria. When it comes to solving problems, he uses diplomacy, only using violence if he has no other choice. Circuit can sometimes makes careless mistakes, but he rarely does. Circuit enjoys helping his fellow pony, so you might find him around Ponyville helping out other ponies in need. He has a blank face on most of the time, which is a habit for him to have that expression. He likes spicy food, electricity, chocolate cake, most kinds of cheeses, beards, and the number seven. He dislikes troublemakers, violence, paranormal phenomena, bullies, and Mondays. Lightning Strike has an extreme case of Phasmophobia, the fear of the paranormal. He also has a bad fear of heights and the unknown.

Circuit's cutie mark is a green circuit board with plenty of gold connections running across it.

How he met Twilight SparkleEdit

It was a bright, sunny day in Ponyville, and Lightning was outside, building his own Tesla coil. He was finishing up with the assembly of the coil, when a gale came by. Lightning was confused by this, because the weather reports said that there would be little to no wind during the day. Lightning quickly inspected the coil after the gale passed, and found that it wasn't damaged. Little did he know, Rainbow Dash was flying in the air, practicing and executing very difficult flight maneuvers, in an attempt to impress her favorite aerial stunt team, the Wonderbolts. She was in the middle of a dangerous flight maneuver when the gale hit, causing her to lose control, and fly off course. She couldn't regain control of herself, and saw that she was heading directly for Lightning, who was oblivious to the impending collision. Rainbow tried to warn Lightning to get away, but it was too late. When Lightning finally noticed Rainbow making a beeline for him, they collided head-on. The collision was so great that it snapped Lightning's horn in half, and knocked him unconscious. Rainbow, on the other hand, landed on him after the collision, a little dazed, but fine. She got up off of him, and started talking to Lightning, thinking that he was still awake, but she quickly found out that she knocked him out cold, and broke his horn. Rainbow started to panic, but then calmed herself. She knew that Twilight's library, the intact Golden Oak Library, was nearby, and she would be able to help Lightning. She then went right to looking for the broken part of Lightning's horn. After a painstaking ten minutes, she located his horn. Rainbow took it back to Lightning, who was still unconscious. She cleaned off the piece of horn, then placed it in her mouth, so she can take it with her to Twilight. After having difficulty with getting Lightning on her back, she started to fly to the library. A few minutes later, she finally reached the library. Rainbow landed at the front door, sweating after she airlifted Lightning, because he was heavy, even for a stallion. Rainbow knocked on the door; a few seconds later, Twilight answered the door. In the middle of greeting Rainbow, she noticed Lightning laying on Rainbow's back, unconscious.

Lightning being trolled by Katana Von Richtofen. (Created by AngelinBlack424.)

Lightning firing a bolt of plasma from his horn. Looks pretty cool, huh? 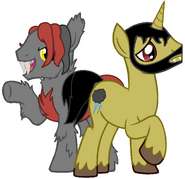 After Pain left Lightning's body, Lightning just couldn't escape the pain and torment that the traumatizing experience brought him. (Created by AngelinBlack424.) 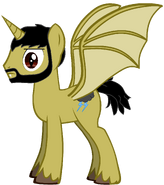 Well, we all learned a lesson today, never let Lightning drive a Warthog, or let him go near Fusion Coils. (Created by AngelinBlack424.) 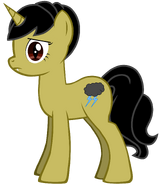 Thunder Bolt as a Vampony. 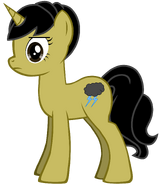 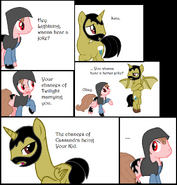 Nickolai and Lightning have their moment where they just feel the need to trash each other. xD

Lightning Strike, one of the residents in the home of the Bad End Night. Drawing by AngelinBlack424.]]

Lightning Strike with no- Lightning Strike: OKAY, WHO THE F*** TOOK MY F***ING BEARD!?
Add a photo to this gallery
Retrieved from "https://epicponyartists-hq.fandom.com/wiki/Circuit_Board?oldid=9362"
Community content is available under CC-BY-SA unless otherwise noted.