"Karlyle is the most beautiful man on Earth... Or is it the Most Handsome woman?"

Karlyle Vladimir is a Purple and dark earth Werepony that is the leader of a werepony clan and is a doctor. He is best friends with Edward Richtofen, and he is also a good friend of Mark. His first appearance is in the Hard to Deceive: The Bleeding short story. He is mostly addressed as he, due to his male snout and name.

Karlyle Vladimir is a very smart and wise werepony who always is approached for advice, and he was the first to be approached by Marisa to explain what vamponies were in the story (Introduced above). Karlyle also can solve mysteries easily.

Karlyle is mostly just notified as a 'He', due to his male snout and how he is named. 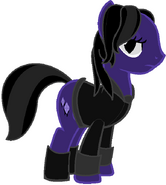 "As of you claim I had done it? How pathetic of you to blame me for something that was clearly in your hooves."

"Need help with something, my friend?". Self Picture of Karlyle.

Karlyle and Richtofen gasping in joy.
Add a photo to this gallery
Retrieved from "https://epicponyartists-hq.fandom.com/wiki/Karlyle_Vladimir?oldid=8084"
Community content is available under CC-BY-SA unless otherwise noted.