Misty May was born in Canterlot with her twin sister, Twilight Sparkle. As a baby, she would use dark magic to trouble Twilight. She fled to the Nightmare forests and met Nightmare Moon who offered to be her mentor. Misty may happily agreed. She studied dark magic and dark spells. Eventually, she became a master and moved back to Canterlot. She occasionaly wrote letters to Nightmare Moon about the problems she began to cause. Nightmare moon was proud of Misty May.

Nightmare moon then sent Misty May on a quest to ponyville to "meet new rivals." Misty May agreed, and began causing problems for each of the ponies. Celestia found out about this, and Nightmare Moon's recent spell about eternal night. Celestia banished Nightmare Moon, and Misty May vowed revenge. She fled into the Everfree forest, and using dark magic, turned herself into an alicorn and built her Dark kingdom. She created the Nightmares, changeling like creatures that looked like each of ponyville's residents.

Misty May has hated her twin sister since birth. She is always trying to get Twilight into sticky situations.

Misty May hates her big brother as well. She never really got to know him, that is one of the main reasons why.

Misty May always felt comfortable around Nightmare Moon. When Celestia banished Nightmare Moon to the moon, Misty May immeadiatley vowed revenge and fled to the Everfree forest. Every night, she would look to the sky in hope of seeing her mentor in the moon. She was always there.

Misty May as a human.

Misty May before she vows revenge.

Misty May cries in her castle.

The last shot of Misty May in the first episode.

Misty May in one of the promotional titlecards. 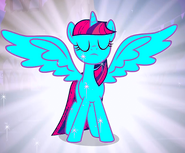 Misty May after she used Dark Magic to turn herself into an Alicorn. 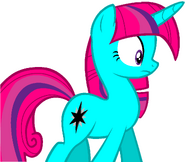 Angelin Black is amazing, no?

The modified logo made by Angelin Black!

In the background.
Add a photo to this gallery
Retrieved from "https://epicponyartists-hq.fandom.com/wiki/Misty_May?oldid=8031"
Community content is available under CC-BY-SA unless otherwise noted.