Start a Wiki
MoonDusk is a black and navy blue Bombay cat that is the low toned and sometimes drepressed one of the group, however he has an extreme mutation making his appearance seem dark, as well as giving him wings, which is not possible for a cat to have. He can predict the future, and the group of cats use his prediction powers to help the group of cats find out what will happen next on their adventure.

Moondusk is a bombay cat with a blue fur stripe down his stomach, as well as a blue nose and blue inside his ears. He has a very rare mutation which gives him wings and a picture of a Moon and clouds on his flank.

MoonDusk is a very quiet and sometimes depressed black cat that can predict the future at rare times of adventure. He doesn't talk too much to new people, but when he does, it's nothing that is positive. He is rarely happy, but when he is, it is due to seeing his favorite cat food, or seeing his family again. 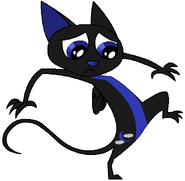 Moon Dusk sees something that may hurt his paw... a rock. 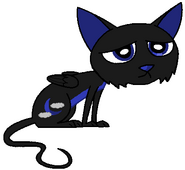 Add a photo to this gallery
Retrieved from "https://epicponyartists-hq.fandom.com/wiki/MoonDusk?oldid=7906"
Community content is available under CC-BY-SA unless otherwise noted.