"I have many choices, but this is one that I wish I never made."

'A few short words can discribe him; when he wears his glasses, he is a stallion of disipline who trys to' keep order in his group of friends. he wants to make sure that no one is hurt by his friends or they are hurt themselves. he shows no respect to the likes of James InfaRed , even going so far as to spit in his face. When he takes the glasses off though... he becomes a monster to fight, he becomes all most a completely different colt. he unleashes his power and can generate enough power that can leave a large crater in the Everfree Forest. He only has one fear: his shadow that was created by Pain when he was little after seeing Pain make his little sister become locked in an eternal nightmare. He will create the monster when he wrongs another (ex: lying, yelling, physiclly hurting someone).

Navy Thunder is a dark blue and brown unicorn pony who is very protective of his family and friends. He is very friendly and talkative most of the time and enjoys being with other ponies. Unfortunately however, if his glasses were suddenly and forcefully to be removed from his head, he would go into an absolute rage, and destroy anything in his path. His eyes turn green, and he does not stop until the threat is gone. He is also very attached to people he cares about, however if he is ordered to eliminate them, he will do it with a heavy heart and a large amount of regret.

When Navy was younger, he had a very bad history with Pain Suffragentice. He now fears about him, as in those times Pain had given many nightmares to his little sister, Crimson Lightning. When he turned 12 year old he became a child soldier to fight along side his mother, "The Boss", and helped lead Eqestria to victory in its war aganist the suffagraves. a year later he was he was sent on a hostage rescue to save one of celestia's best weapons manufacture but was stopped by the last person he would have expected, his own Mother. they fought but he was unable to defeat her and got his front right leg broken, but Pain made sure that she was not a tratir and blew up the edge of the Everfree Forest that was north of ponyville, fraiming "the Boss" for the explosion. Three months pass and he was sent to the furthest edge of the Everfree Forest on the western side (away from civilization), where he fought his Mother unit, hundreds of suffergraves, and then Pain (who after that he thought he killed).later on, he went to try to get his mother to go back with him but she was dead set on fighting him. he was the victor and killed his mother in cold-blood with her own weapon, The Loyalist. days later he recived a tape telling him that "the boss" was not a tratior but a spy who was working aganist Pain and that she was to go down in history as a shameless tratior and he was out of only five people who would know the truth of what she did. Two days later, he is given the Distinguished Sevice Cross by Celestia herself infront of all the royal families for his actions but he left it at the grave of his mother with The Loyalist. When he turned fifteen he joined the Sons of Equestria as a member of it's Peace Sentinals, the group that made sure that all creatures were in check and under control. he was deployed to the Town of Ponyville after the rise in numbers of vampires in the local area. 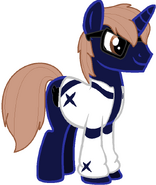 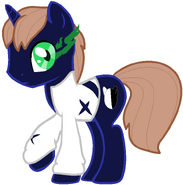 Enraged Navy after his glasses having been removed.

Navy in his secondary outfit.

Angry Navy Thunder.
Add a photo to this gallery
Retrieved from "https://epicponyartists-hq.fandom.com/wiki/Navy_Thunder?oldid=6597"
Community content is available under CC-BY-SA unless otherwise noted.