Peppermint Fantasy is an orange and red earth pony disguised suffragrave that takes care of animals, and has a pet St. Bernard (Name Undecided). She is very kind and quiet, and she is one of Marisa's long time friends. However, she is deathly scared of vamponies, and so Marisa and her husband must hide their vamponic abilities from Peppermint at all times.

Peppermint dislikes the Suffragentice Empire, and wishes that they could become a better kingdom and befriends the Equestrian Ponies. She still takes of her animals and socializes with her friends in Ponyville where she now lives.

Peppermint Fantasy was originally born in the suffragentice empire and was one of Black Lullaby's best daughters. She was spoiled and played with her mother, until one day Peppermint was seen making friends with a regular pony from Equestria, and she was sentenced to death by Pain. However, overnight, Peppermint ran away to live in Equestria before the suffragraves could get rid of her by death sentence. She ran away with her friend from the town, and she began living with her friend for quite some time after that.

After a few weeks of moving in, she began to play with her friends pet dog and decided to buy one herself. She bought and began taking care of a big St. Bernard Puppy until it grew up. She than needed to think of a way to disguise herself so that Equestria would not feel threatened by her being a Suffragrave. So she disguised herself as a regular pony. Now she still takes care of her animals, but feeling bad about the possession at the same time.

Rythm.png
The first picture of 'Rythm'. 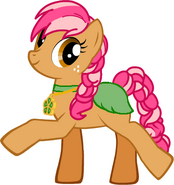 Peppermint Fantasy.
HiresPony.png
A relaxed Peppermint Fantasy.
Hi Res Surffragrave.png
Peppermint as her old Suffragrave Self.
Add a photo to this gallery
Retrieved from "https://epicponyartists-hq.fandom.com/wiki/Peppermint_Fantasy?oldid=8016"
Community content is available under CC-BY-SA unless otherwise noted.