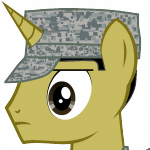 I am a person that lives on the eastern coast of the United States of America, in Florida. I am eighteen years old, and I am a senior in the high school that I attend. I am currently in the U.S. Army JROTC program, rank Cadet Major (C/MAJ), pay grade O-5 (I don't get paid), which means that I am a commissioned officer. I used to be the battalion S-4, or the Supply/Logistics Officer. After high school, I plan to go into the U.S. Army Reserve for a year, and then enroll into college, do Army Senior ROTC, then be commissioned in the U.S. Army as a second Lieutenant (2LT), pay grade O-1. I am a man of few words, so if I comment on a page or something, then there is not going to be a lot of words typed on there, unless I type a lot of words on there. To the right you will see my first OC and ponysona, I made him physically resemble me in a few ways, one of them is his blank expression, which I usually have on my face.I am a PC gamer, I usually play a lot of games on my gaming rig, I use Steam to play most of the games that I own, if you want to talk to me on Steam, my name is Agent Nikolai | NNJG, I also use Origin, my name on there is Agent_Nikolai(or Agent Nikolai, I can't really remember.) I also play on my Xbox 360, my gamertag is Agent Dimitri(Agent Nikolai wasn't availiable). Again, I fixed it, so I am on during the day. I am also a BIG Halo and Deus Ex fan. I also have ADHD-PI, or ADD.

These are the OC's that I have created so far. Names in red are OC's that will be added to the wiki eventually.

Retrieved from "https://epicponyartists-hq.fandom.com/wiki/User:Agent_Nikolai?oldid=9399"
Community content is available under CC-BY-SA unless otherwise noted.