Waffle Mint Hamelswourth is a seagreen colored werepony pegasus with a very smart personality and a quiet speech. He does not talk to others. He, however, is friends with Marisa Ariel Dempsey and her friends, and is the cousin of James InfaRed, which was the reason he came to Ponyville.

Waffle holds a severe crush on Brutal "Chii" Essin, and has a poor studdering problem when trying to talk to her. She finds him odd, and so does not get any hints that he likes her.

Waffle Mint holds an extreme rivarly against Nickolai Antonio Bloodgood. Ever since Waffle turned werepony he dislikes Nickolai for being a vampony. It had gotten worse after he found out Nickolai had gotten married to one of Waffles' friends.

Not much is known about Waffle so far. What is told by the creator is that he had came to Ponyville to run tests on his cousin James InfaRed after finding out about his immortal powers including Vocal hypnosis and hair extending. James, however, hides from Waffle, showing that Waffle is one of James' weaknesses.

Waffle is a 'computer nerd' and is both book smart and street smart. He believes that he would rather learn than befriend. This, however, changed in his opinion once he had met Marisa Dempsey and her friends, and Waffle instantly grew a crush on Brutal "Chii" Essin, who thinks he is wierd. Whenever he approaches Chii, he does not know what to say and studders while trying to talk, which makes Chii either laugh or get somewhat creeped out of.

When Waffle had received his cutie mark, he was depressed by it's 'boring' design which happened to be a Computer Mouse. He disliked his mark, and so 're-created it'. He found a way to create a new cutie mark and sew it to his flank, and so he created a white lightning bolt.

Waffle Mint has a deep backstory about becoming a werewolf pony at a very young age.

When Waffle Mint was an extremely young Colt, he had always walked across a very interesting abandoned building. At that time, no one went near that building because of the sounds they had heard and the objects that had moved. They thought the home was a host of the undead. Waffle always thought to adventure into the building but was told to never enter it by his parents, for the myths that were being passed around they believed that her true.

Waffle ignored his parents one day and continued to happily go to that same building overnight. He dared to walk in and see what was going on, until turning around and seeing the cracked window he saw the jaws and the fur of the Werewolf pony as it stared at him for those few seconds. He stood there not moving, until than he ran out of the building towards his parents garage. The thing, he thought was following him. The next morning, he was stiff and felt bent, and had a very hard time getting out of his own bed. It took a few weeks to finally realize that when the full moon set, Waffle became a werewolf pony of his own. Now every once in a while, Waffle continues to run the darkness as werewolf pony of the night, and now that he knows that Vamponies exist too, Waffle knows that he must hunt them, for the two are complete opposite enemies. Unfortunetly for him, he does not know that Marisa Ariel Dempsey used to be a vampony herself, and still has the urge to drink blood even though her vampirism is cured. 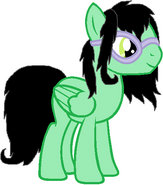 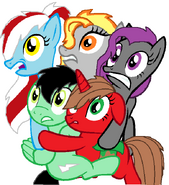