Wonder Muffin is a shy and harmless younger unicorn sister of Marisa Dempsey. Wonder Muffin is currently in love with Sweet Serenity. In Marisa Adventures, in the Halloween special, Wonder Muffin killed by Maisa after being infected with rabies. She was than ressurected by Vaatu as his zombie minion.

Wonder Muffin is a small and shy unicorn and a fellow sister of Marisa. Being younger then her sister, Wonder Muffin may sometimes uncontrollably use her magic and not think before she acts. Her cutie mark, a musical note, respresents her talent for enjoying music. She is best at playing the Paino and the violin, and owns one in her room next to Marisas'.

Wonder Muffin is mainly the one causing trouble in the town of Ponyville. With a younger age, she cluelessly causes magical havoc when in times (Taking hold of the Alicorn Amulet, Jumping in the Basement Time Machine, Breaking Marisa's stuff, etc.).

"One of the most innocent but mischevious ponies in Ponyville, Wonder Muffin will always be witnessed somewhere causing trouble. This small pony just can't keep herself confortable staying in one place and keeping everything peaceful, but one thing is for sure that she doesn't do it on purpose!"

Wonder Muffin was born on the same date as Marisa, in the haunted location of Der Riese, with her father Seargent Dempsey and (Unnamed Mother). Her mother, right after having them, died after being shot be Takeo (???) and so Wonder Muffin had never gotten to know who her mother really was. She was sent in the Time Machine with Marisa by Dempsey, but started to gain her unicorn powers by her young filly years when she had entered the same Time Machine as Marisa in the future. The two foal claiming guardians of the two foals could not handle Muffin's Unicorn abilities, and so was treated poorly mostly by her step-father. When they slowly started to grow up, Wonder Muffin started thinking about trying to using her unicorn powers, but with so caused messes and havoc in the home. When Marisa started to find information of her father, the two step-parents had died. Wonder Muffin was still trying to calmly use her powers, but continuesd on to cause trouble, but by the time Dempsey had found them and had moved in with them, he started to teach his daughter how to use it the correct way, Him being a high level unicorn.

To this day, Wonder Muffins still causes trouble with her unicorn magic, but with help from her father, She is inproving. With Marisa's Memory completly erased in the short fanfiction "Lifeless" (Read Marisa's Written Stories Section), Wonder Muffin finds it harder to maintain her daily life. Hopefully she could've lived through it long enough.

However to a sad twist, Wonder Muffin had caused trouble once again, a few days before Nightmare Night, and she ran into the Everfree forest. There, she was than bit by a rapid creature, and gained Rabies. She started to create pony dissapearances, until Marisa found out and was forced to kill Wonder Muffin. After the funeral, A voodoo pony named Vaatu ressurrected Wonder Muffin as his zombie minion. 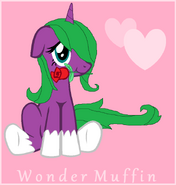