This Character is owned by the user Siete marmamrae. "I swear one day, I would find the g roup of gang that killed my father and make sure they pay for it! BY TORTURE THEM!"-zapping flare talking to herself after her's father got killed by group of gangs

Zapping Flare had a deepest dark history that had a STRONG bond between her and her father.  They loved each other like there is no tomorrow, they would do anything together until one day her father got killed by a group of gang.  Sadly, her mom didnt have enough money for her father's burial.  After finding out about no money for the burial, Zapping Flare became angry and hate toward her mom.

Then one day, Zapping Flare's father had left her with everything and a piece of letter.  That  says, "Dear Pumpkin, if you are getting this letter,  I want you to go to your basement and there's a teleporter, you may not know this, but I have been traveling back to the future to stop the unknown dangers that  could destroy the ponyville in the future.   Now I leave this teleporter with you and please take a good care of yourself and the teleporter - Love Dad."

After Zapping Flare read this letter, she swore that she would find a group of gang that killed her father AND to help in her father's defense aganist the unknown dangers.  However, when her mom found out about her plan and refused to let her do that.  In doing that,  she would drag Zapping Flare to every doctor in every town in hoping  she would forget all about her father and the teleporter but that did not succeed.

Then Zapping Flare's mother  had no other choice but to see Doctor Richoften in order to perform memory erasing for Zapping Flare but in turn, it went terribly wrong and set backfires.  It ended up turned Zapping Flare into a insane killer and half of her's memory was lost.  The other half of her memory she remembered were few things and quickly hopped in the teleporter and disappeared.

Zapping Flare was never seen until after the ODIN impacted and she returned to Ponyville to question every pony about future of Ponyville.  She, then, decided to flee into a deep everfree forrest wearing long dark cape and dyed her mane into different colors.  The only best friend she had that understand her was Amber Hollywether.

zapping flare is quietest pony and hate to be around strangers  and she had a short fuse and get mad very easily,  she hardly smile and usually mean,grumpy and sometime rude 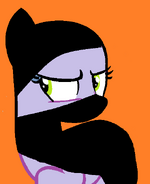 made by Angelinblack424
Add a photo to this gallery
Retrieved from "https://epicponyartists-hq.fandom.com/wiki/Zapping_flare?oldid=8120"
Community content is available under CC-BY-SA unless otherwise noted.